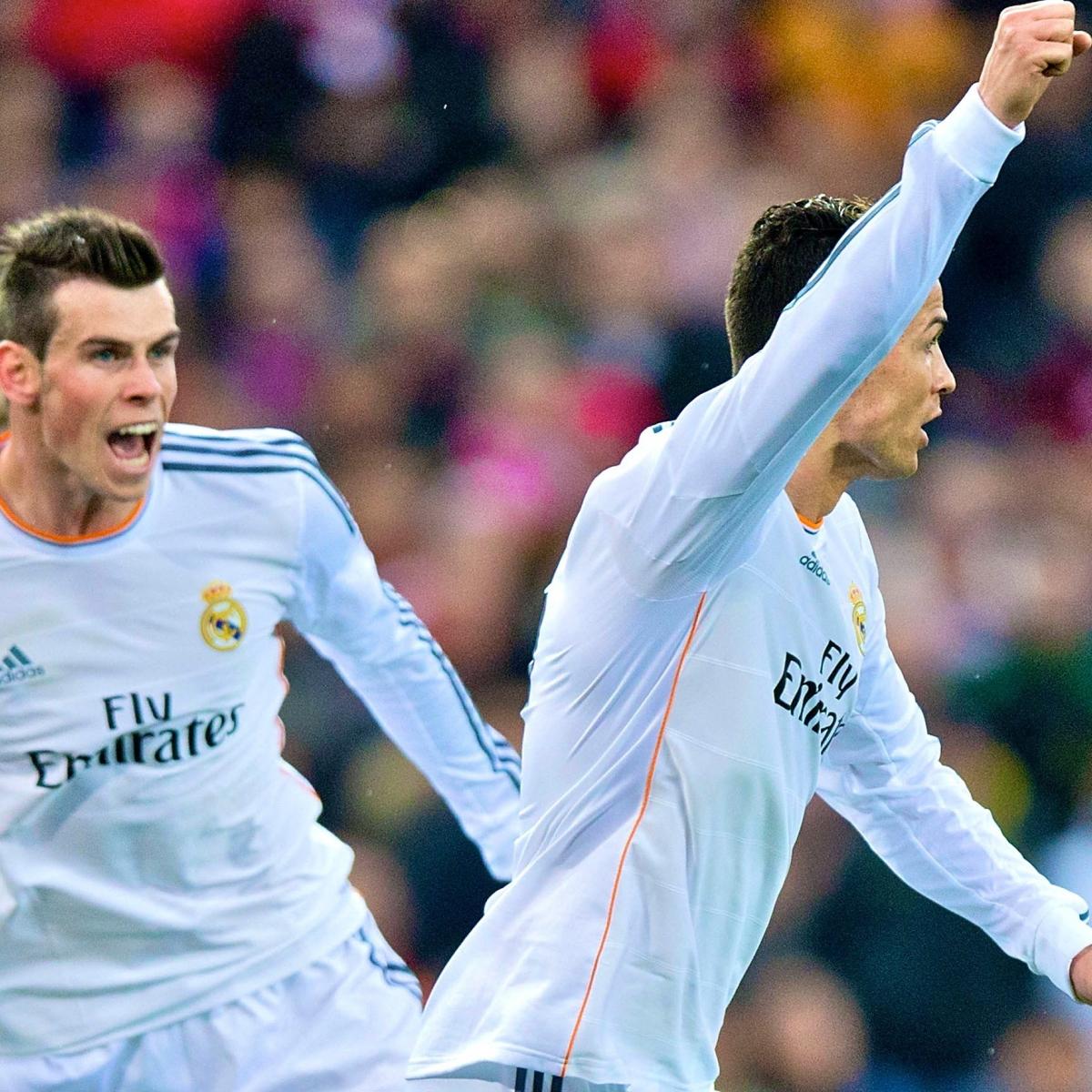 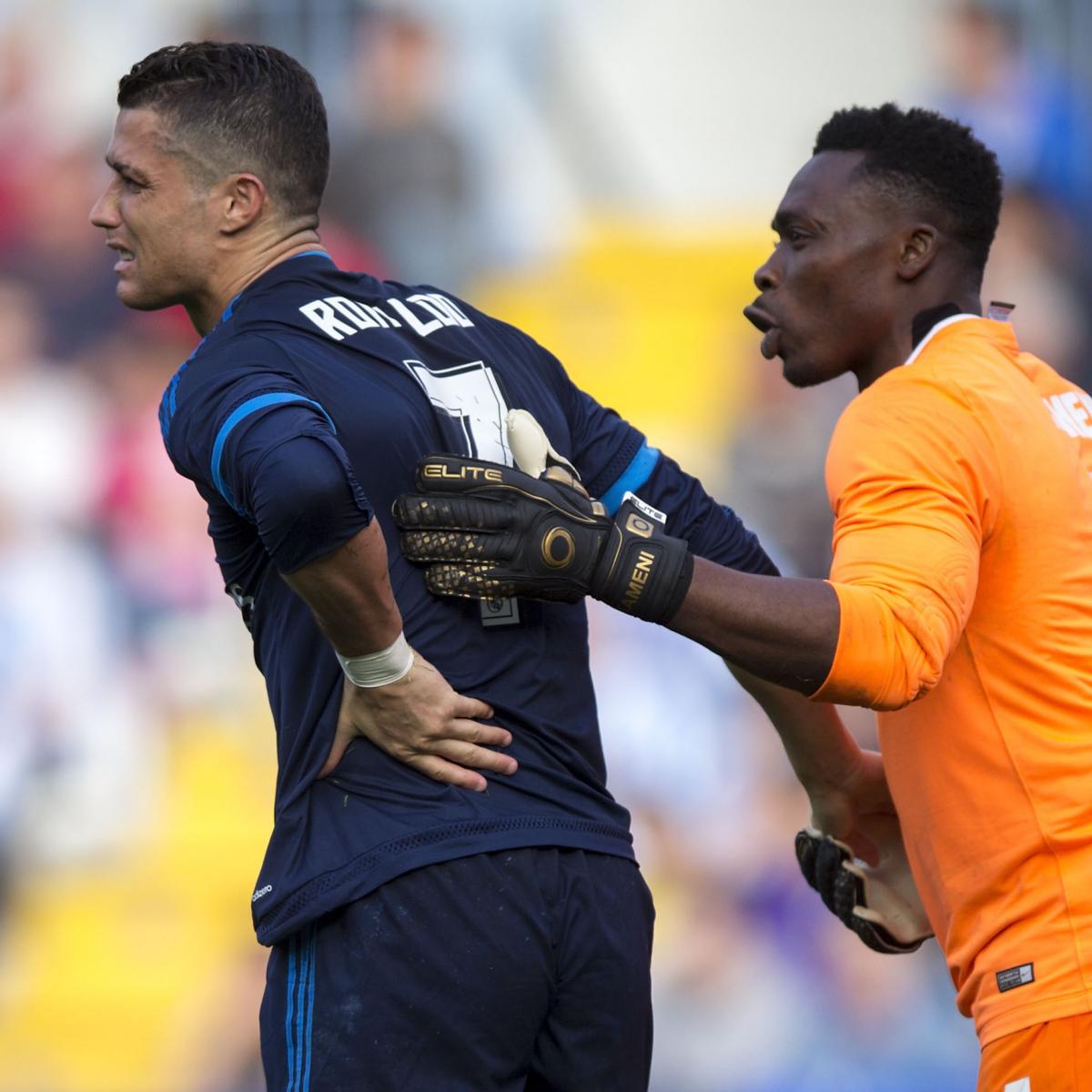 His attempt is saved by the goalkeeper Cross into the box by Marcelo [Real Madrid] and the ball is cleared by the defence Substitution for Real Madrid.

His shot goes narrowly over the crossbar. He takes it with his right foot. The attempt is saved by the goalkeeper.

Assisted by Weligton. His attempt is blocked by an opponent. Headed shot from Isco [Real Madrid]. His attempt goes narrowly wide. Substitution for Real Madrid.

Attempt by Isco [Real Madrid], right footed shot following a team move, assisted by Marcelo. His shot is blocked by an opponent.

Real Madrid methodically make their way down the right flank before Carvajal, who has arguably been one of Real Madrid's best players thus far, wins them a corner.

It's curled into the heart of the penalty area, where Ramos is waiting to meet it, but he's beaten to the ball by Charles and the Brazilian does well to head it away from danger.

Jese breaks down the left flank before being bundled over by Charles, resulting in a free-kick for Real Madrid and a yellow card for the striker.

The visitors take it short and work the ball around quickly as they try to find a way into the Malaga penalty area, but they're swiftly put under pressure by the hosts and are unable to do so.

Cop flies through the Real Madrid defence and meets a lovely through-ball from Juanpi before trying to fire a low strike into the back of the net, but the Real Madrid goalkeeper sticks out a foot and sends the strike looping up into the air before Ramos tips it over the top of the crossbar with his head.

Kameni did wonderfully well to tip Ronaldo's strike away from goal, but the Portuguese really should have done better with that chance, as he didn't hit it with enough conviction and, as a result, the Malaga goalkeeper was easily able to read the shot.

Ronaldo steps up and tries to bury the ball in the bottom right-hand corner of the net, but Kameni does wonderfully well to get down quickly before parrying the shot away with a strong, diving stop.

Things have gone from bad to worse for Malaga! Ronaldo twists and turns on the left-hand side of the the hosts' penalty area before being clumsily tripped over by Weligton, leaving the referee with no choice but to point to the penalty spot and show the Brazilian centre-back a yellow card.

That was a wonderful cross from Kroos, who perfectly picked out Ronaldo, but the replays indicate that the Portuguese forward was at least a yard offside.

The Malaga players aren't happy at all and are arguing vociferously with the referee. Real Madrid have taken the lead!

Carvajal tries to skip past Horta on the right flank but is clumsily fouled by the Portuguese winger, resulting in a free-kick for the visitors in a dangerous position.

It's curled into the heart of the penalty area, where it finds Ronaldo completely unmarked, and the forward is able to direct a wonderful header past Kameni and into the top left-hand corner of the net.

The visitors are seeing far more of the ball and, as a result, they look to be on the front foot.

After a nervy few moments, Real Madrid are finally able to push forward on one of their first attacking moves in almost 10 minutes. They move the ball around well before Marcelo decides to shoot from 25 yards out, but his audacious curling effort is overhit and sails comfortably out of play for a goal-kick.

Poor, nervous play from Real Madrid inside their own half of the pitch allows Juanpi to pick up the ball in a pocket of space in between the visitors' midfield and defence.

He takes a quick touch before trying to tee up Charles, who makes a good run forward to try and meet it, but the Venezuelan's pass is poor and misses the striker before finding the hands of Navas.

Once again, poor defending from Real Madrid almost gifts Malaga with a great opportunity to score.

The ball bounces around the visitors' penalty area before Nacho eventually tries to clear the danger, but his attempted clearance bounces off Camacho and into the hands of Navas before it can roll into the back of the net.

Kameni's save results in a free-kick for Real Madrid, but it's easily dealt with by Malaga. They then try to break away on a quick counter-attack through Rosales, but the right-back is cynically fouled by Marcelo, who receives a yellow card as a result.

Fantastic goalkeeping by Kameni! A beautiful low pass from Marcelo rolls through the Malaga back four before finding the Real Madrid striker, who is completely unmarked inside the box.

He takes a quick touch and then tries to beat the Cameroonian goalkeeper, but the shot-stopper comes out on top thanks to a great diving save.

And now Horta misses a great opportunity to put Malaga in front! Juanpi, who has been darting all over the place in the opening 22 minutes of the game, cuts inside from the right wing and picks out the aforementioned Portuguese on the left-hand side of the Real Madrid box.

He's completely unmarked and only has Navas to beat, but he ends up sending his shot well wide of the goal.

The hosts are all over their opponents, but they really need to start doing better in front of goal! What a mistake by Kroos! The German midfielder completely fall asleeps and pokes the ball straight past Ramos and into the path of Juanpi.

The midfielder flies into the Real Madrid penalty area and is presented with the perfect opportunity to put his side up, but he completely scuffs his close-range shot and sends it straight into the hands of Navas.

He really should have done better! Isco goes close! Once again, Carvajal shows great vision with his passing, and this time it's the former Malaga midfielder that he picks out with a lovely cross-field ball.

It's brought down well before he unleashes a thumping shot from the left-hand side of the penalty area, but it ends up flying just a yard or so over the top of the crossbar.

Great play by Real Madrid! Carvajal darts down the right flank before sending a beatiful through-ball into the right-hand side of the Malaga penalty area.

Jese flies through the disjointed back line and meets the ball well before firing a first-time shot, but Kameni is there to smother the danger with a brilliant save at the near post.

Almost a costly mistake by Navas! The Real Madrid goalkeeper sends an absolutely awful goal-kick straight into the feet of Cop, who then immediately tees up Charles with a deft through-ball.

The striker flies into the penalty area and goes one-on-one with the Costa Rican shot-stopper, who does wonderfully well to atone for his error with a well-timed diving save before the linesman's flag is raised for offside.

A lofted pass forward finds Ramos on the edge of the Real Madrid penalty area, but the centre-back's attempted clearance is poor and can only find Cop.

The Croatian then plays a quick one-two with Charles before unleashing a first-time, curling shot from 20 yards out, but it's completely overhit and sails comfortably over the top of the crossbar and out for a goal-kick.

A slightly tentative start from Real Madrid has resulted in them looking somewhat frustrated, and a late challenge from Recio results in an angry response from Marcelo.

The two clash momentarily, but the referee is quickly there to calm the situation. Vital interception by Albentosa!

Straight from the restart, Real Madrid break away on a blisteringly quick attacking move, with Isco flying down the right wing before curling a cross towards Ronaldo that is headed out of play by the aforementioned defender.

The resulting corner is flung into the heart of the box, where it finds Ramos, but the centre-back is unable to beat Kameni with his tame effort.

The resulting set-piece is sent deep towards the edge of the Real Madrid penalty area, but Jese reads the flight of the ball well and is there to cut out the danger with a strong header.

Malaga win a throw-in on the right flank, which they take quickly before Juanpi tries to penetrate the right-hand side of the box, but he ends up fouling Kroos in the process, resulting in a free-kick for the visitors deep inside their own half of the pitch.

Good play by Malaga! Charles breaks down the left wing on a great run before cutting inside and teeing up Cop. The Croatian out-muscles his marker with ease before spinning and sending the ball back to his strike partner, but he is quickly closed down before he can shoot and, as a result, he has to settle with a corner.

Isco breaks into the left-hand side of the Malaga penalty area and showcases his wonderful skill as he weaves his way past two defenders.

He then heads across the byline before cutting inside and firing a low shot from close range, but Rosales is just about able to get a foot in the way to stop it from testing Kameni.

After dealing with a good start by Malaga, Real Madrid try to break away on a quick counter-attack through Jese. The strikes flies through the middle of the pitch and heads towards the halfway line, but before he's able to meet it he's cynically dragged to the ground by Torres, who receives an early yellow card as a result.

Early pressure from Malaga results in Ramos sending a very risky backpass towards Navas, but the Real Madrid goalkeeper is just about able to dart out and clear the danger before Charles can make contact with the ball inside the penalty area.

And we're off! Real Madrid get us underway, attacking from right to left. The two sides are making their way out onto the pitch, with just a few minutes to go until kick-off.

Meanwhile, Real Madrid boss Zinedine Zidane has made three alterations to the side that featured in the aforementioned win away to Roma during the week, with the main talking point being the inclusion of Jese, who takes the place of the injured Karim Benzema.

Javi Gracia has decided to make two changes to the Malaga side that lost against Villarreal last Saturday, with Recio and Ricardo Horta coming into the starting line-up to replace Fernando Tissone and Pablo Fornals, respectively.

Los Boquerones suffered a frustrating and narrow defeat away to Villarreal last weekend, but they have lost just once in their previous five home games in the top flight, with that defeat coming against Barcelona almost a month ago.

When required they have be known to be a compact and well-organised side, one that defend resolutely before picking apart opponents on the counter.

After suffering a disappointing month in the run-up to the annual winter break, Los Blancos have been in impressive form since the thrashing of Rayo Vallecano in their final game before Christmas.

Since then they are unbeaten in all of their nine domestic games, with seven of those ending in victories, including high-scoring affairs against Deportivo La Coruna, Sporting Gijon and Espanyol.